Phnom Udong is located in Psar Dek and Phnom Bat communes, Ponhea Leu district, about 41 kilometers north of Phnom Penh. The city drops behind while fishing villages and rice paddies surround either side of the sweeping plains of Kandal province. Then without warning, a mountain rises above it all, topped by the spire of stupas like some fairy castle. The road to Udong is clearly marked, and the distance along this road to the former city is less than 4 kilometers. Picnic huts selling everything from sweet palm fruit to roasted chicken cluster around the base of the hill.

There are three names for this hill: Phnom Udong, Phnom Preah Reach Troap and Phnom Edthareus. The site includes the summits of five hills: Chetdei, Trai Treung, Chetdei Kampul Buon, Preah Ang Chol Nipean, and Ariya Kasaks. Chetdy and Trai Treung summits are the same height. The area of Phnom Udong is about 1,500 meters by 700 meters from the east to the west.

Close up, Udong actually appears as two hump-backed hills. The smaller is topped by shrines and the remains of Ta San mosque, built by a Cham Muslim on ground given to him for the purpose by one of the ancient kings. The main hill is said to be shaped like a naga. The stupas on the main hill house the remains of past monarchs, includil’lg King Moniyang and King Ang Duong. A new huge stupa at the end of the mountain ridge was completed in 2002 and built to hold relics of the Buddha. The relics, once housed in a small stupa near the railroad station in Phnom Penh, were .relocated to the new stupa by King Norodom Sihanouk and Queen Norodom Monineath Sihanouk in December 2002.

This site is of particular interest to visitors seeking to learn about early Cambodian history. Udong was home to several kings when it served as the Cambodian capital between AD 1618 and 1866. In addition, it offers more than an exhibit of ancient history. At the top of the stairs on the left lies the city’s most impressive structure, Vihear Preah Edthareus, sanctuary of the 18 cubit Buddha, retains the scars of heavy strafing inflicted in face-to-face firefights between Khmer Rouge, Lon Nol and American troops in the 1970s. The eight huge columns of the shrine rise into the sky, the roof they once supported was destroyed when Khmer Rouge forces blew up the temple in 1977. The arm and part of one side of a huge Buddha remains, and his face has placed at the foot of the pedestal and a modern shrine built around it.

However, the severity of the fighting and the extent of the damage to this once magnificent building do not take away from its haunting beauty. The views of the surrounding countryside from entire ridge are breathtaking, and the silence casts an air of serenity over the battleground of a war long past. 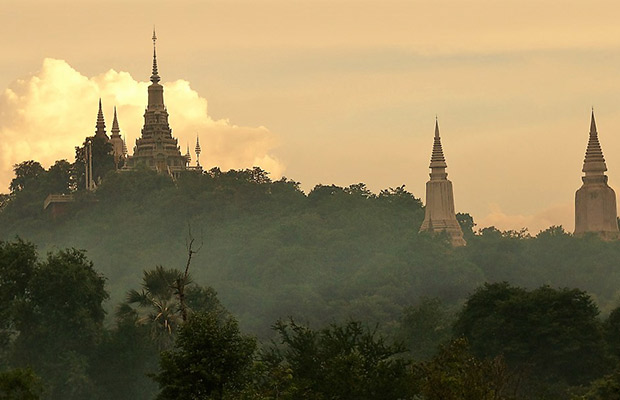 The tours to go to the top hill is open everyday it starts from early morning till mid day, the Cambodia Tour Guides is able to provide the tour service within a private car and also a private tour guide to go to through along with you.

Need a tour within local general