Koh Pich is one of the island in Phnom Penh City and it’s also meant diamond island if we are translated from Cambodian to English, Koh is meant Island and Pich is referred to Diamonds. And now it’s going to modernization and also smart city of Phnom Penh in coming years soon.

It’s the newest city, located on the island of Phnom Penh capital and facing to Basacc and Mekong rivers, the island have developed and then turned to Cambodia’s modernest city, there are full of sky buildings, entertainments, parks for kid and big gardens, in short word we are to call the island city as Smart City Of Phnom Penh. 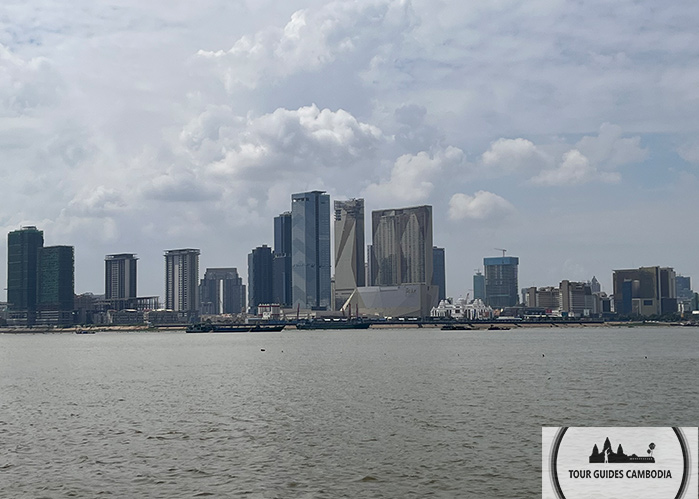 Take a look at the frontside of island it’s showing the beautiful stunning building in which had just being built for recently years and plenty of the sky buildings are being constructed around the island body. Local and international hotels, condos and restaurants are appearing for everyone to go and have a look them.

“It has been 40 years since the Khmer Rouge regime fell, leaving behind depopulated cities after exterminating a quarter of the population including 90% of the local elite. In an attempt to catch up, Cambodia is now betting on urbanization to drive the country’s development. The dizzying growth of the Khmer Kingdom, led by Prime Minister Hun Sen, has been intensifying for a decade thanks to the support of Sen’s economic partners (mostly Chinese companies) who are investing broadly. The vast majority of Cambodians, however, make an average salary for monthly and aren’t feeling the benefits of the country’s modernization. Thus, the population, of which half is under 25 years old will simply settle for the bliss that the modernity brings. Diamond Island is this futuristic town where the two faces of this “new Cambodia” are concentrated.

“Koh Pich” means “Diamond Island” in Khmer. It is an artificial island which was built fifteen years ago on the shores of Phnom Penh. Before its existence, there were vast swamps a few dozen fisherman families called home. They were all expelled in 2005, their lands bought for just a few pennies. In 2006 the entire island was sold to the investment company Overseas Cambodia Investment Corporation.

Nicknamed “Diamond Island,” Koh Pich is now a hotspot for the real estate investments. Yet for the moment, no one really lives there except the Chinese. Transformed by real estate developers who intend to make the island a symbol of the “new Cambodia,” there is no doubt that this land of 75 hectares with its new villas and buildings under construction will be exclusively for the rich. One of the neighbourhoods has already been nicknamed “Elite Town,” where a house can cost up to $1 million. Just opposite, the “Elysées project,” a huge project of 150 million dollars, is essentially a fake Paris with copies of Haussmann-style buildings and a replica of the Arc de Triomphe. Thousands of workers toil on the project for a mere $150 USD per month. Around these developments, skyscrapers grow like mushrooms.

At night, it’s a totally different atmosphere. The people of Phnom Penh flock to Diamond Island after work; While the well- off attend weddings in luxury cars, the middle and popular social classes come with the family or friends to have a good time. Others come for a romantic getaway. Everyone wants to taste the beginning of the modern world, from enjoying a fairground by the river to parking between skyscrapers.” To see more photos then please go to https://www.thestoryinstitute.com/diamond-island